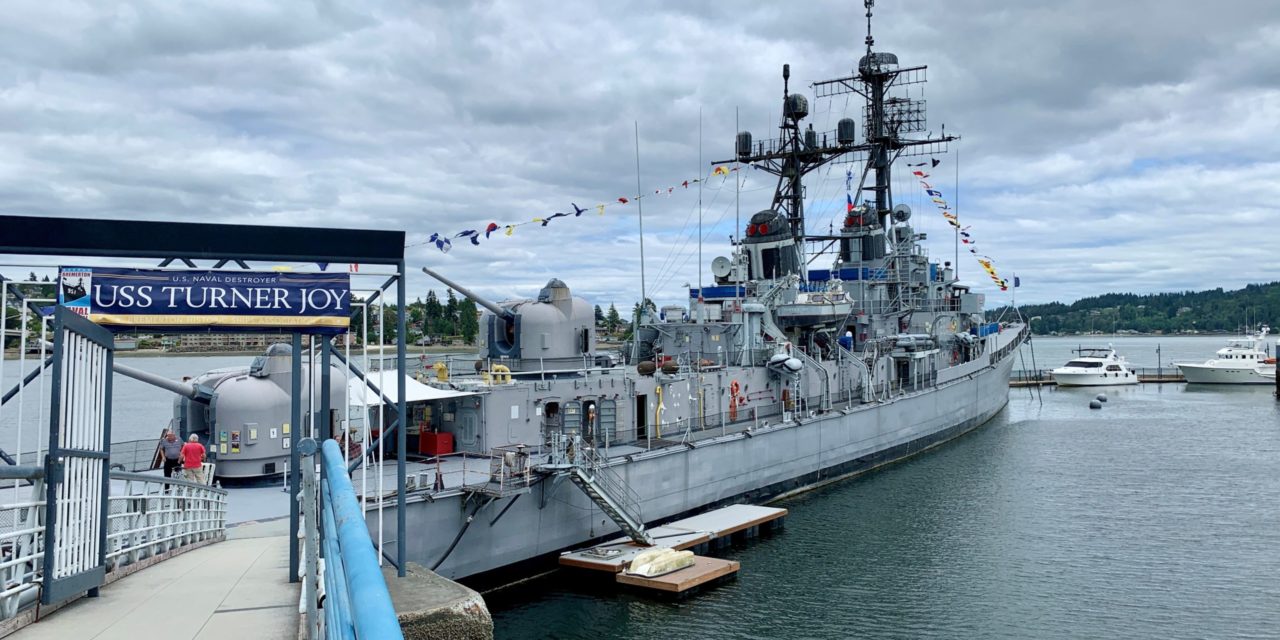 If you haven’t been to Bremerton lately you will be pleasantly surprised. The city has leveraged its long naval presence and capitalized on its convenient waterfront location to provide a destination for tourists, especially for us recreational boaters that enjoy a good port with interesting sights and fun activities.

The city of Bremerton is located approximately 17 miles (via ferry) west of Seattle on the Kitsap Peninsula, or 65 miles if you drive across the Tacoma Narrows Bridge. The fastest way to get there from Seattle is on the passenger-only Bremerton Fast Ferry with a crossing time of 30 minutes, about half the time of the WA State Ferry. Cathleen and I arrived on our boat Fiddler and got a slip at the Bremerton Marina. The Bremerton Marina is located next to the ferry terminal and within easy walking distance to waterfront attractions.

Our first stop, just steps away from our slip, was a self-guided tour of the 418-foot Navy Destroyer USS Turner Joy, named after Admiral Charles Turner Joy, a veteran of World War II and the Korean War. The ship was built in Seattle in 1957 and commissioned at Pier 91 in 1959. Over its 23-year service life, it served tours in Pearl Harbor, Guam, and several Asian nations, but its most noteworthy deployments were its seven combat missions to the Vietnam War. The tour allows access to all four decks where we easily spent two hours reliving the USS Turner Joy’s proud history and accomplishments of the so-called “Tin Can Sailors” who served on the flagship destroyer. A modest entrance fee is required for access.

As we explored the promenade and immediate waterfront area, we found opportunities for fine dining, coffee, ice cream, and groceries that serve visitors as well as the many residents living in the condominiums and apartment buildings nearby. In the heart of the Harborside area is the Kitsap Conference Center, a 17,000 square foot venue that hosts meetings, conferences, trade shows, social events, reunions, and weddings. A Hampton Inn and Suites hotel is adjacent to the conference center. There is a lot more going on in Bremerton than we had first realized. 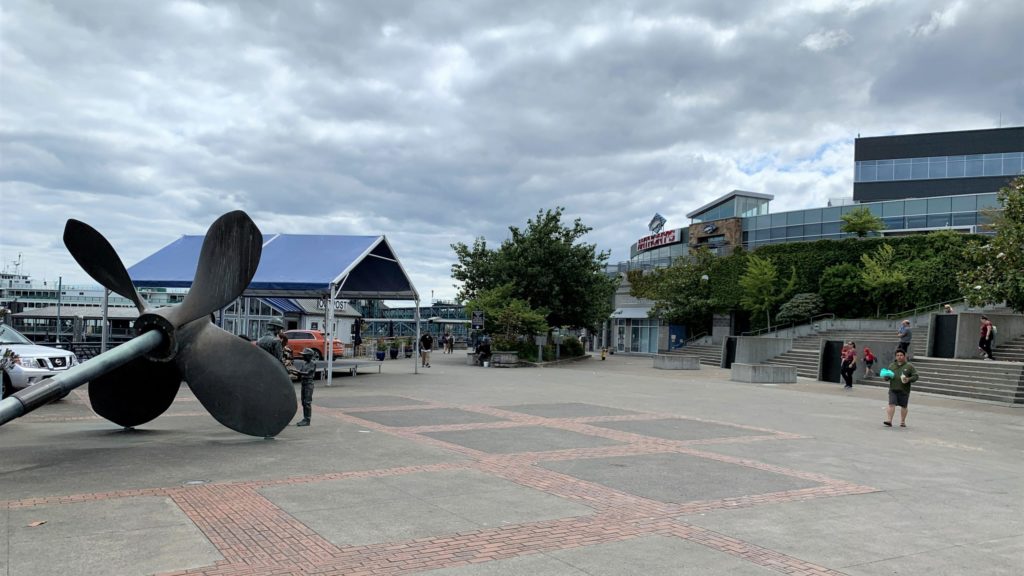 Located between the ferry terminal and the gigantic naval shipyard is the Puget Sound Navy Museum and the fascinating Harborside Fountain Park. The museum is located in Historic Building 50, which was built by the Navy at the Puget Sound Naval Shipyard in 1896 to serve as the Administrative Headquarters. It has been physically relocated three times within the shipyard boundary. Its present location is adjacent to the Bremerton Harborside complex and was donated to the city by the Navy, along with ownership of Building 50. Bremerton funded needed renovations, maintaining its core exterior architectural values, and leased it for use as a Navy Museum. Building 50 provides the museum with 6,000 square feet of exhibition space and 4,200 square feet of collections space. There are two floors of exhibitions, the first chronicling the history and operations of the shipyard, and the second dedicated to what it is like living on an aircraft carrier, along with smaller exhibits and photograph collections. The museum is staffed by volunteers and admission is free. The museum is open daily from 10am to 4pm. 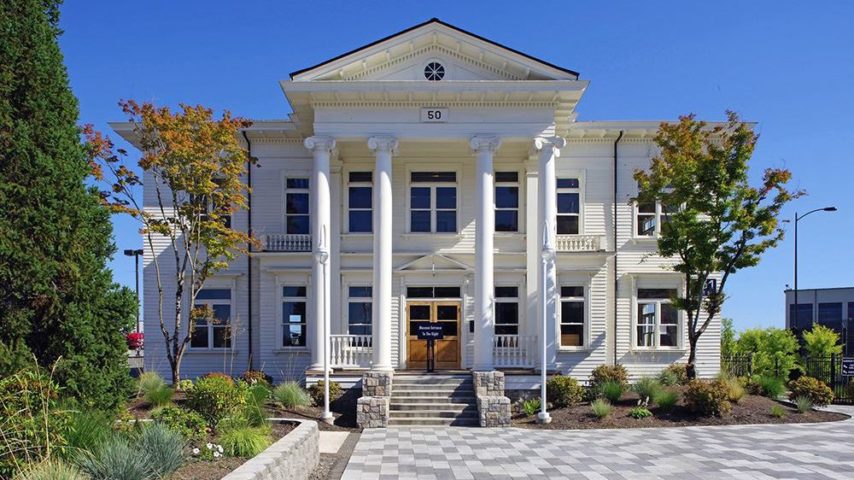 Heading from the Navy Museum to the water is a narrow two-acre park with a series of five copper-ringed, nautical-inspired fountains resembling the sail of a modern submarine. The fountains emit a giant spray of water in a series about one every thirty seconds, then all five fountains erupt at once with and impressive water display. On hot days, the breeze and cool spray is refreshing. We also appreciated the benches and picnic tables while enjoying the fountains and watching the boat traffic in Sinclair Inlet. 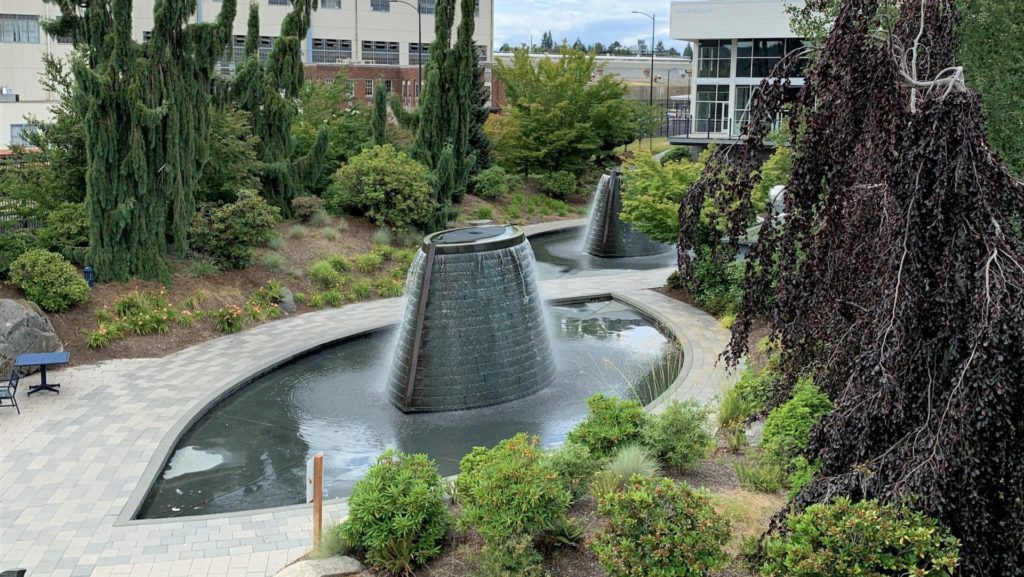 The redevelopment of the Bremerton waterfront is ongoing. Scheduled to open later this summer is the new complex of apartments, a hotel, and commercial space known as “Marina Square.” We will definitely be back to enjoy Bremerton’s revitalized waterfront. 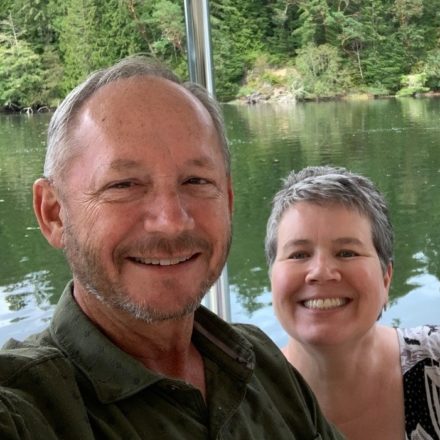 Dale and Cathleen Blackburn have lived in Washington for nearly 30 years. They cruise the NW waters on their 46-foot DeFever Pilothouse, Fiddler, and have recorded their boating adventures from Olympia to Juneau in MVFiddler.com. They are active members of Meydenbauer Bay Yacht Club and Port Ludlow Yacht Club. Dale and Cathleen enjoy meeting other boaters and visiting new locations. 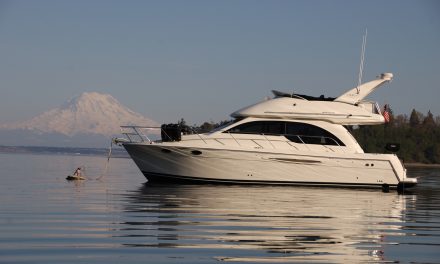 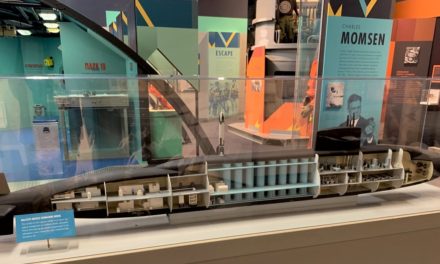 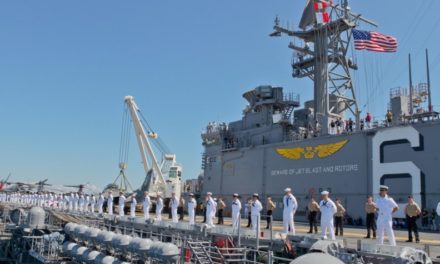 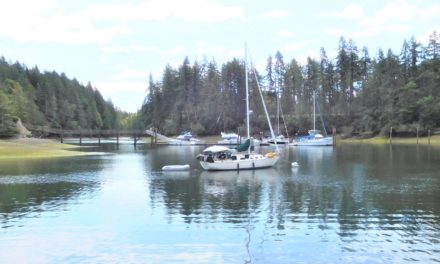