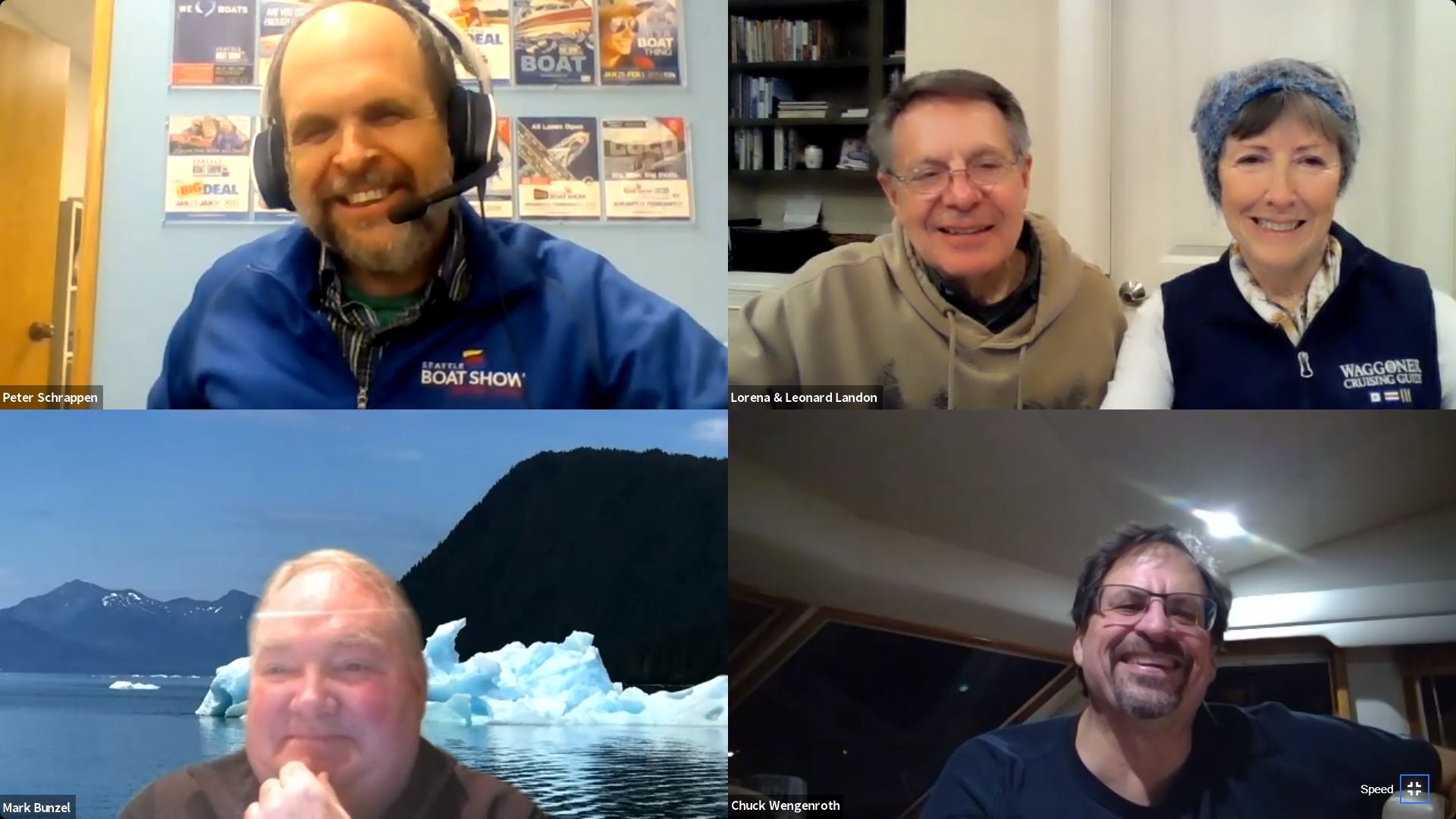 Join us every Thursday at 7 p.m. (Pacific Time) for this educational boating series! Get the latest boating news and find out great places to cruise with fun interviews. These Zoom sessions are co-hosted by the Waggoner crew and the NMTA, famous for the annual Seattle Boat Show event. Register now for the next session and watch the Seattle Boat Show LIVE!

Back by popular demand, we are re-broadcasting this program, while the NMTA and Waggoner are on hiatus.

Vesper, the leading designer and manufacturer of AIS systems, has just released their new Cortex system. Cortex takes a fresh new look at the VHF radio and combines it with AIS and boat monitoring into a new system that also offers many new capabilities. Through an intelligent design, Vesper has built many new capabilities into this system.  Let’s say your AIS system alerts you to a possible collision. Wouldn’t it be great if you could use your radio’s DSC capability to alert and directly communicate with the other vessel. Done. Or, wouldn’t it be great to have an anchor watch system that could alert you via your smartphone if your boat is dragging while you are away onshore. Or, how about a system that can let you know that your boat is taking water while sitting in its slip in the marina due to a leak in a through-hull. Our AIS expert, Doug Miller of Milltech is our guest to talk about this exciting new system; join us on Thursday April 15 at 7 p.m. PDT to learn more about the future of marine communications with the Cortex system.

Pumpout! There is an app for that!

Back by popular demand, we are re-broadcasting this program, while the NMTA and Waggoner are on hiatus.

Join us on Thursday at 7 p.m. PDT, April 22nd, to hear Washington Sea Grant’s Aaron Barnett present a new program to help find the nearest pumpout location with an app on your smartphone or tablet. The app is called Pumpout Nav and is free on either the IOS or Android platforms. The app will map out the nearest pumpout stations and give you the distance and direction, a convenient way to get to the nearest pumpout. Planning for pumpout is just as critical as planning for water, provisioning or getting rid of garbage. In partnership with the Washington State Parks Clean Vessel Act program, Washington Sea Grant manages the popular Pumpout Washington program, which informs boaters about where to find pumpout stations, helps marina operators secure grants to install more stations, and advises on the deployment of mobile pumpout services. In the past year, more than 8.3 million gallons that would previously have been dumped into vulnerable waterways were instead collected for safe onshore treatment, thanks largely to training, outreach and federal funds provided by the pumpout program.

The Sunsetting of Raster Charts and the Dawn of ENC’s

NOAA is in its second year of a five-year process to end all raster chart products. The sunsetting of raster charts also means the dawn of improved electronic navigational charts, including large scale coverage, data consistency, and a new grid system. Crescent Moegling, NOAA’s Northwest & Pacific Islands Navigation Manager, will be joining NMTA and Waggoner for Seattle Boat Show Live on April 29 at 7 p.m. PDT to explain the sunsetting process and the implementation of the NOAA ENC National Charting Plan. You won’t want to miss hearing about this important topic, along with other navigation tips. Bring your drinks, questions, and experiences to share.

Missed a show? We record them all. Watch the latest shows below or check out our archive of past shows.

Did you know that you can charter a Le Boat to explore the Rideau Canal, an inland waterway in Ontario Canada? The Le Boat charter business arrived in Canada in 2018, and established a fleet of canal boats like those based in Europe. Lisa McLean, Sales & Marketing Manager for North American Le Boat, will be sharing the many reasons to boat Ontario’s UNESCO World Heritage Rideau Canal. Join Waggoner and NMTA to learn about the history, picturesque towns, wildlife, and the 47 locks along the 125-mile Rideau Canal that takes you from Ottawa to Kingston. Come ride along with us on one of North America’s most interesting navigable waterways.

Has your boat been sitting idle all year during Covid-19? Or perhaps you have an older boat that’s overdue for fuel tank cleaning. No one wants to experience clogged fuel lines when dealing with choppy seas during a cruise. Join Kalen Wilson of West Coast Tank, along with NMTA and Waggoner hosts, to learn more about fuel polishing and the importance of keeping your fuel tank clean. Learn about microbiological growth, bacteria, and fungi which eventually causes corrosion and pits in your fuel tank. Bring your questions that you’ve always wanted to ask. How do I know if my tank needs cleaning? How are fuel tanks repaired? How often is fuel polishing necessary? What about fuel additives and onboard fuel filters? These and other questions will be covered during a lively discussion around this important topic.

Steve Mitchell, a Marine Electronics Design Consultant, helps boaters choose and design systems that allow redundant and reliable connectivity for working professionals. As a consultant, Steve does extensive research and field tests on various products. His respected website, SeaBits.com, is loaded with helpful information. Learn all the tricks of the trade on how to put a system together for your boat. Bring your questions!

Guest speaker Larry Graf will be joining us to share his Northwest Territories boating adventure down the Mackenzie River to the Artic Ocean aboard his 34-foot Aspen, the same waters that explorer Mackenzie first saw in the 1800’s. Larry spent two weeks and traveled 2,200 miles in some of the most pristine and untouched waters in the world. Join us to learn more about this incredible journey — where they got fuel, villages they visited, and how they dealt with weather and river current.

March 11: Communications — Latest Options for Internet Connection from Your Boat

Join Doug Miller of Milltech Marine, along with NMTA and Waggoner hosts for Thursday’s, March 11th Webcast for an interactive discussion regarding maintaining an internet connection while cruising. Learn about WiFi boosters, cellular boosters for phone and data, cell plans, antennas, and LTE routers. Discover the options to make it all work in today’s virtual-meeting bandwidth demands.

Join us to hear Casey Mclean, Executive Director and Veterinary Nurse of SR3 (Sealife Response, Rehab, and Research) discuss SR3’s recent construction of the first dedicated marine animal rehabilitation center in the Pacific Northwest. Hear Casey’s first-hand accounts about marine animal rehabilitation, the threats our local wildlife face, and the need for this hospital in our region. You will also learn about the organization’s work to help save entangled whales and drive conservation efforts for Southern Resident killer whales.

February 25: S/V King's Pride: The Refit of a Classic Cruising Sailboat as a Learning Experience

Join us to hear guest speaker Mike Beemer talk about his student project to refit a 39-foot Westsail, the S/V King’s Pride. Michael is the Department Head and Marine Maintenance Instructor at the Marine Tec Center in Anacortes, which is a branch of Skagit Valley College. Learn how student assignments to refit a vessel purchased by the school coincided with classroom instruction. That included surveys and planning, the task of pulling out the engine, installing a new engine, and overhauling all of the boat’s systems including refrigeration, electrical, plumbing, drivetrain assemblies, and propeller assemblies. Students also installed an inverter, new bilge pumps, and new fuel tanks — a true real-life experience for students entering careers in the marine trades industry. This beautifully refitted vessel — the S/V King’s Pride — is the childhood home of Jennifer King of K&R Electronics and will be up for sale in late June or early July of 2021. She will be a wonderful vessel to own, filled with history and pride.

February 18: Using Satellite Communications on Your Boat to Keep in Touch

Some of us need to stay in touch from remote locations while we are out enjoying cruising in the Northwest or offshore. When cell phones won’t do, Satellite is our next best option. Luckily the costs are coming down and there are different options now available. Local expert Jeff Thomassen and his wife Katie from Ocens join Seattle Boat Show LIVE to give us a complete update on the different options for data, text, and voice communications using the different satellite networks and devices now available for purchase or rental. Jeff’s company, Ocens, provides satellite communications for many of the oceanic sailing races and global cruisers who need to keep in touch when out at sea.

February 11: Living Aboard and Moving to Southeast Alaska

Having just moved to Southeast Alaska, guest Chuck Wengenroth will be sharing his lifestyle living aboard his vessel in the community of Sitka, Alaska. Learn how he and crew successfully did a transit through B.C. during Covid-19, how they endured gale warnings, and re-started their careers as registered nurses. Their journey began with a trip to Puget Sound from San Francisco before continuing to Southeast Alaska last summer. They will be sharing first-hand recommendations for preparing the boat and making preparations for a move to Southeast Alaska, all from the boater’s perspective.

Get our #1 cruising guide, maps, charts, tide guides, and much more for cruising the Pacific Northwest. It's all online at the Waggoner Store.